Leafing through the history of the Bibent means going through the history of Toulouse for over a century and half. Even if his date of birth has remained controversial and mysterious for a long time; it is almost certain that Le Bibent has been present at number 5 of the Place du Capitole since 1843 (Archives de Toulouse), date of its creation by Jean-Catherine Bibent, who passed it on to her son Narcisse-Léon from 1870.

Close to 180 years
of history at the Capitole 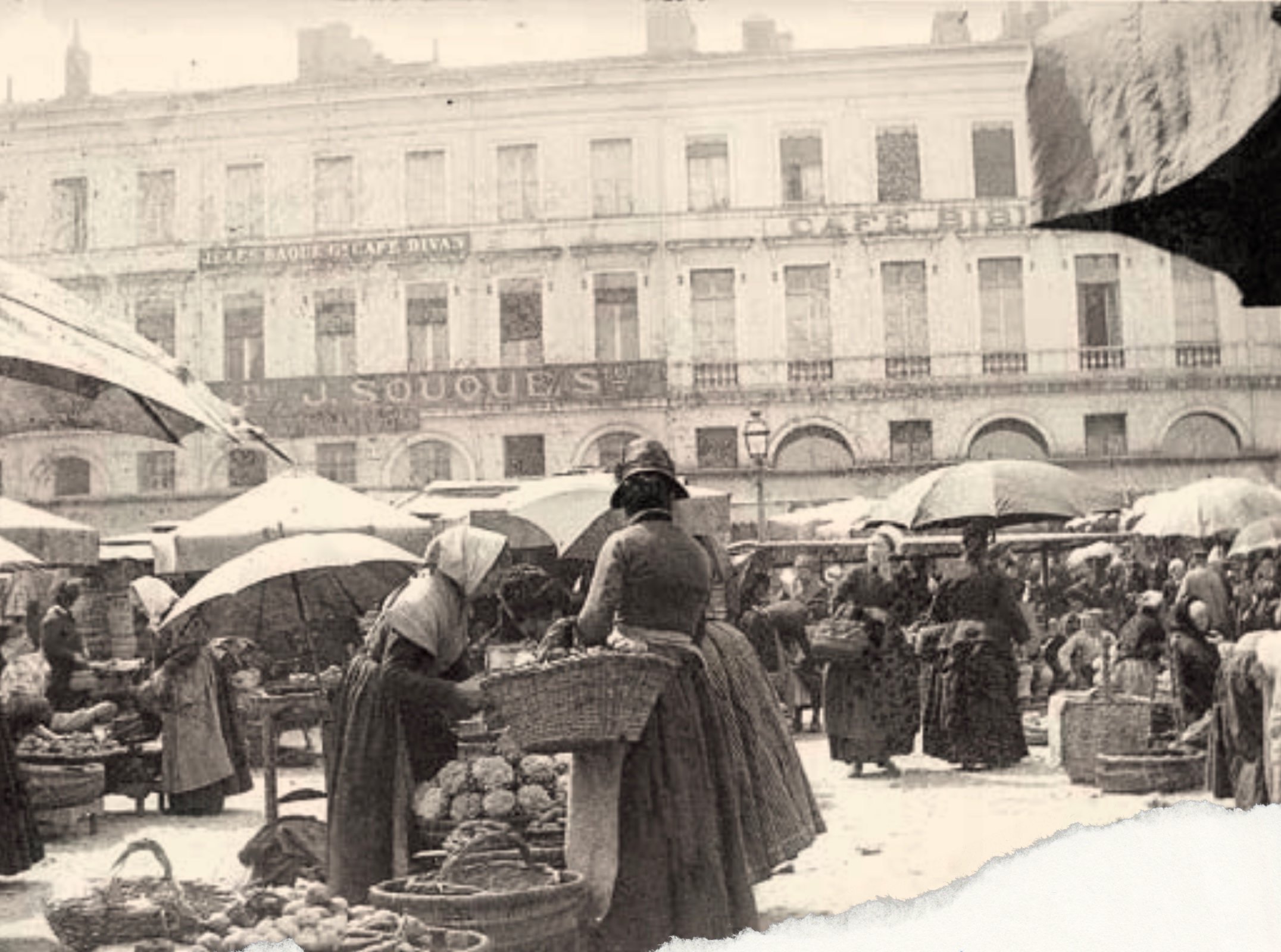 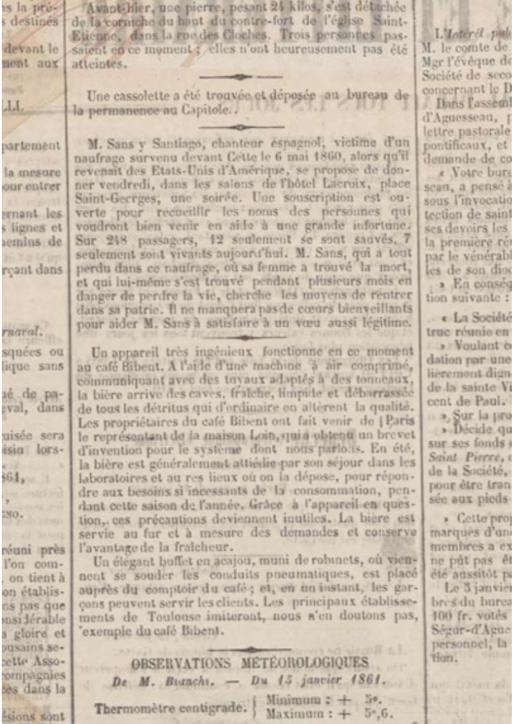 It is a wonderful brewery mixing baroque and art nouveau which opens its doors in 1861. The owners of the café brought in from Paris the representative of Loin, the owner of the patent for the compressed air machine system. This innovation was born at the Bibent and made the establishment the first of the Toulouse cafés to offer beer under pressure in 1861.

The first café in Toulouse to offer beer under pressure. The origin of the brewery

On the place of
Capitole in 1862... During the morning, there is
an important market.

In the 1860s, the Place du Capitole offers an interesting, varied and lively aspect at any time of the day. During the morning, there is an important market : gardening, fruits, poultry, fish are sold there; in the afternoon and evening, it is the meeting of a still considerable crowd of walkers and strollers ; it is then the Palais-Royal and the Boulevard des Italiens from Toulouse. 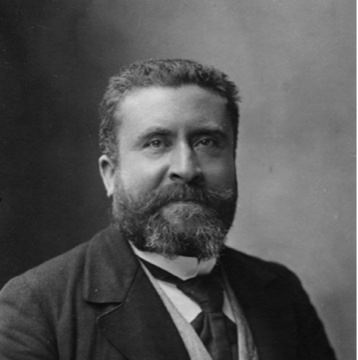 It was on the terrace of the Bibent that Jean Jaurès himself, then a city councillor and deputy mayor, wrote his first articles for “La Dépêche”. 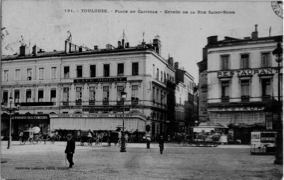 The Toulouse cinema has a very rich history, the first cinematographs invade the pink city, the American Cosmographe and Le Bibent screen every night art and essay films. 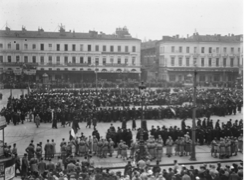 At the end of the first war, the American students landed in Toulouse and took their quarters to the faculty. The university newspaper "What is it?" was born in English and became the city guide for English-speaking students. The Bibent is regularly featured in the «Café Chats» culinary chronicles.

1919
The arrival of American students

From the Belle Époque
to the Roaring Twenties

Whether it’s a flower festival, a angling contest or a parade to the glory of Toulouse, Le Bibent is always at the forefront of Toulouse’s festivities. 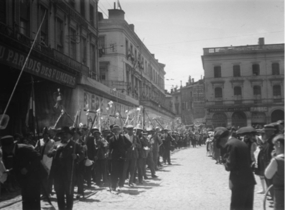 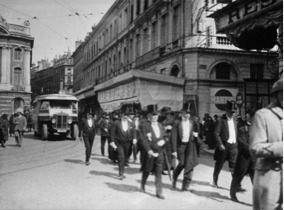 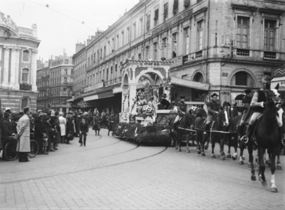 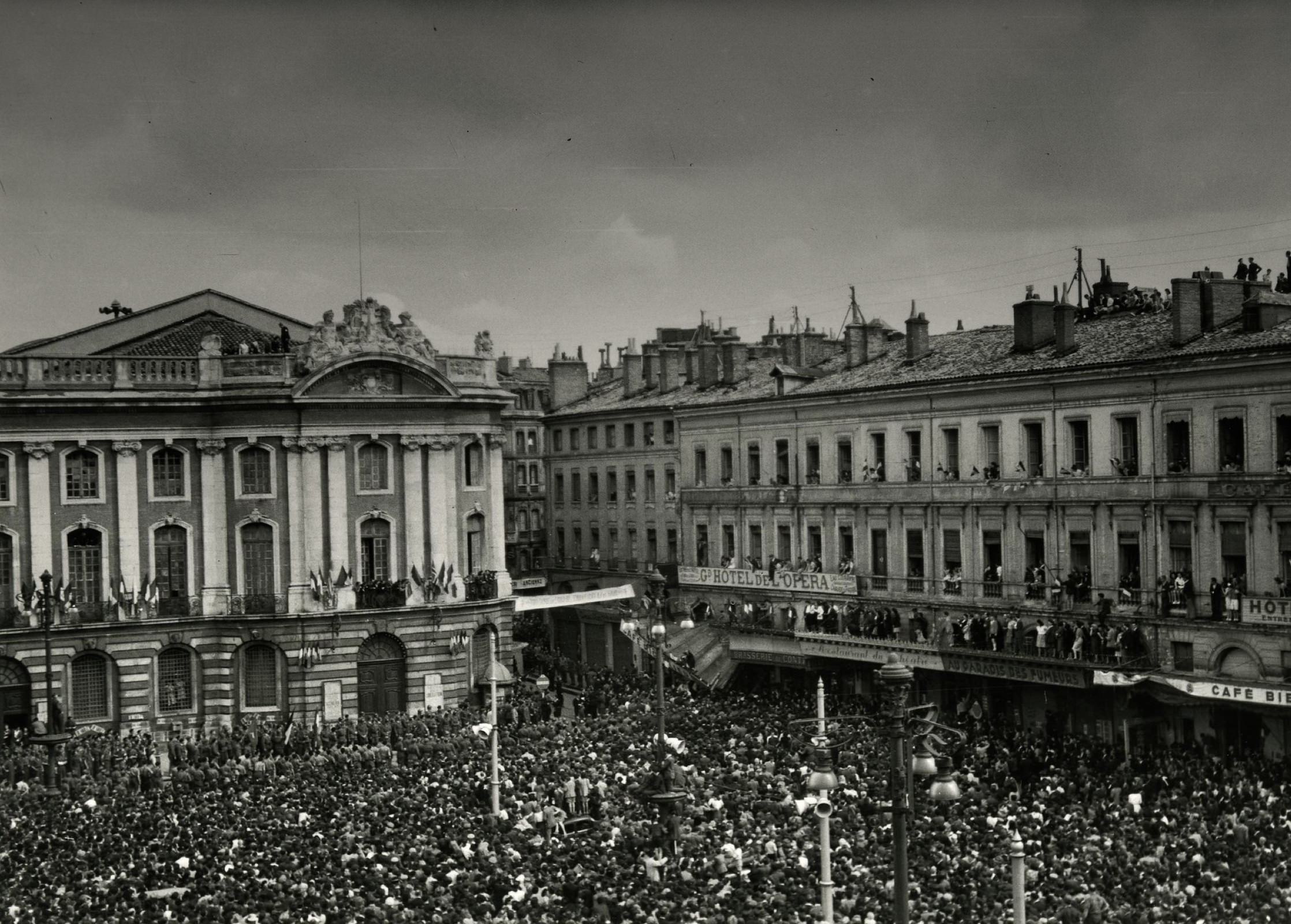 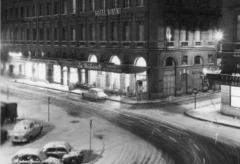 Bibent Thursdays animated the city until the late 1970s… At the forefront of innovation and progress, Bibent remained an essential part of Toulouse’s cultural and political life. With its decoration of stucco painted in Napoleon III style, the café Le Bibent was until the late 1970s a kind of Café de Flore du Midi.

1967, the snowy Capitol Le Bibent under the leadership of the famous photographer Jean Dieuzaide.

At that time, on Bibent Thursdays, the finest of the Toulouse intelligentsia found itself. The painters Jean-Emile Jaurès, Carlos Pradal, Christian Schmidt, who was the first director of the Municipal Cultural Centre, Pierre Igon, Robert Thon, Kablat, his daughter Maryse, Georges Artémoff; the animators of the Toulouse cultural life, Michel Roquebert, Henry Lhong, who four years earlier had founded with Robert Aribaut and Charles-Pierre Bru the Salon «Art Présent». And again Denis Milhau, then curator of the Augustinian Museum, and many others.

Already in 1881, Jean Constans, deputy of the Haute-Garonne, then minister of the Interior, held a meeting there.

Closer to home, many remember Dominique Baudis’ election evenings and political staffs eagerly awaiting the results of the polls, barely a few dozen metres from the Capitol.

The Bibent, added to the additional inventory of Historical Monuments in 1975.

In the mid-1970s, the owner of the time, Émile Lapoujade, considered a complete renovation of the café with the aim of modernizing it. Farewell to the Second Empire decor, stucco, cariatides, garlands of flowers and grimacing masks… However, a strong local mobilization manages to save the work of the architect J-P Virebent thanks to a classification order to the additional inventory of Historical Monuments, dated October 29, 1975. However, a 1979 restoration destroyed the original color. 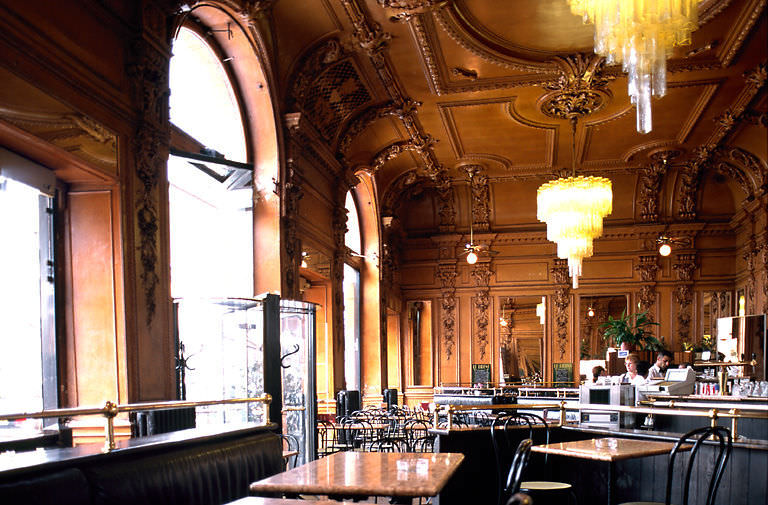 The café was expanded on three levels. Now a brewery, a new clientele replaced students and artists. Along with its soul, coffee gradually loses its appeal.

In 1999, Martine and Thierry Oldak bought the walls of the Bibent with the aim of returning the former splendour to the most famous brewery of the Place du Capitole. In 2009, the businessman was accompanied by Axel Letellier, a heritage architect, and Christian Constant, a Michelin-starred chef. During twelve months of work, the renovation carried out by the architectural agency and the decorator Béatrice Gayral has made it possible to find the original colors: green, red and gold. The Murano mirrors and chandeliers have been preserved, for a young respectful stroke both in terms of art and the spirit of the oldest of Toulouse cafés, and certainly one of the oldest in France. 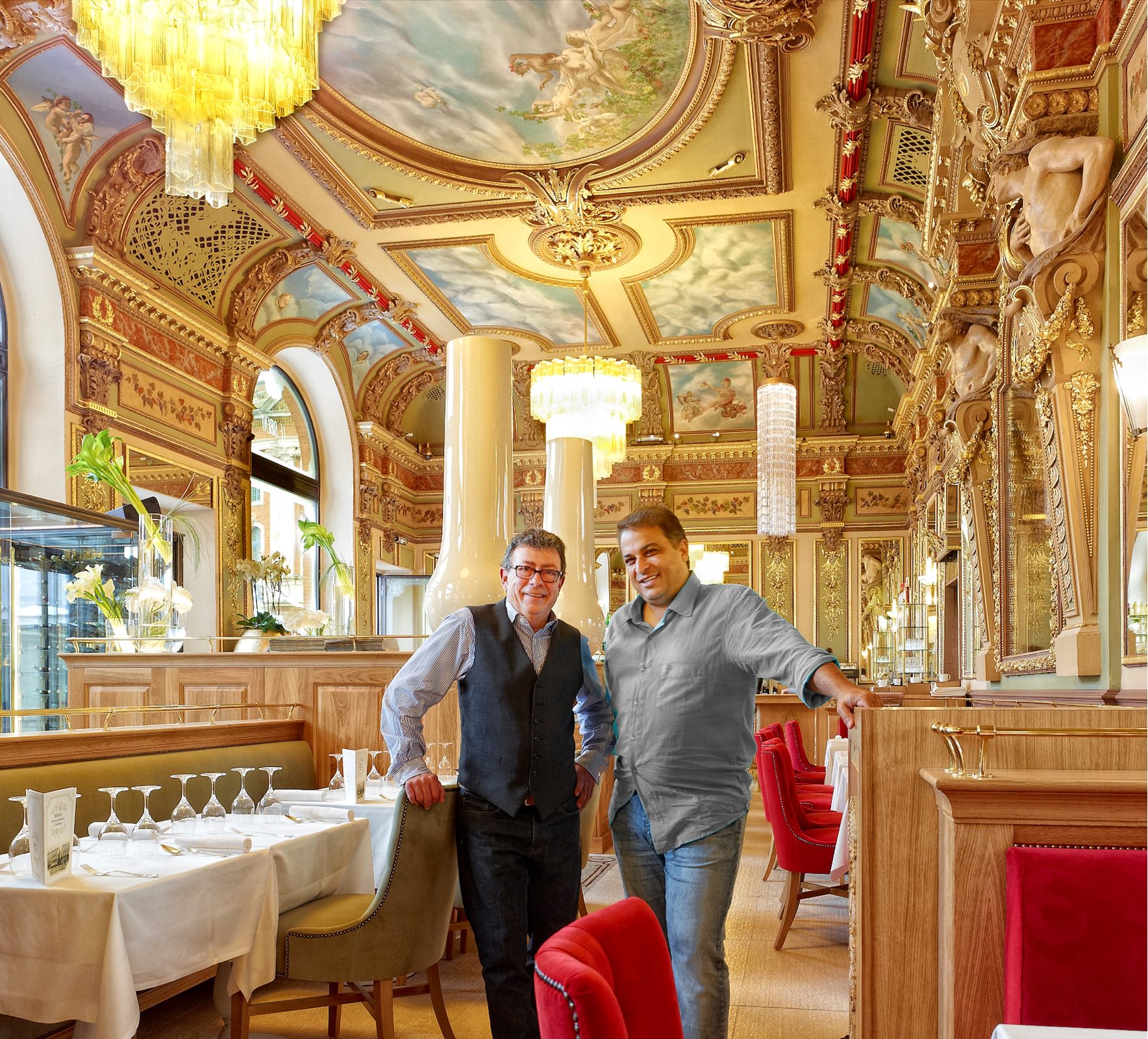 The Bibent then finds its Belle Époque decor and reopens its doors in June 2011.

“It’s a return to the roots for me. I want to revive the Bibent. It’s a magical place, just like the Place du Capitole is in Toulouse… I will make a menu worked with local products, simple dishes, gourmet, quality and cheap, like veal head or cassoulet ! I want the people of Toulouse who want to go out and eat well to come back to Bibent”, said Christian Constant, at the helm of the brewery’s kitchens.

A bistronomic cuisine combining
tradition and modernity...
In 2019, chef Yann Ghazal joined the kitchens of the most famous brewery on the Capitol where he acquired the know-how and ancestral recipes of Christian Constant while bringing his experience and touch. A new culinary era begins !
Owner of the establishment for more than 20 years, Thierry Oldak has at heart to perpetuate the soul of the place and to always delight his clientele with traditional cuisine, tasty combined with a modern edge and a demanding service.

“Here, time slows down, we regain a taste for sharing, well-being, well-eating and well-drinking, meaning of Bibent en Occitan.”

By entering your email address, you agree to receive our newsletters and you read our Privacy Policy. You can unsubscribe at any time using the unsubscribe links.

By continuing with your navigation on this site, you accept our use of cookies in order to optimize the quality of our service. Know more.